Over in Quebec, the right-wing ADQ is having a leadership race to replace Mario Dumont. The two front runners have recently been caught in a spat that was rather ugly. Gilles Taillon, former #2 in the party, announced he has cancer and will remain in the race while seeking treatment. Taillon purposefully parachuted himself in 2008 into a riding that was unwinnable for his party, and promptly lost his seat. That prompted Éric Caire, his main challenger, to ask if the party leader should be in "intensive care".

Insensitive as it may be, Caire has a point, and other leaders with cancer have tried to lead their parties and not done an amazing job, the latest case being the Yukon NDP's Todd Hardy, who spent half the campaign in hospitals in BC.

While Caire does raise a valid concern, he's clearly done it in an invalid way. This has brought attention to the ADQ race that it does not need.

In fact, what we now have is two candidates, one who loses on purpose and another who cant keep his foot out of his mouth, who want to lead a party that needs to rebuild. All of this is very bad news for the ADQ.

Posted by Unknown at 7:38 AM No comments:

The Tories are on a roll, storming ahead at the expense of the Liberals. As they steal percentages and half of percentages from the Liberal vote, we find the NDP is benefiting despite heading in a downward direction. The only place the Tories are heading down is in BC, while they are picking up speed in Ontario. Our projection is closing in on our trendline, at this rate we expect the Tories to be at 143 by the end of next week (Note, however, that trendlines can change rapidly, and they could easily find themselves at 124) 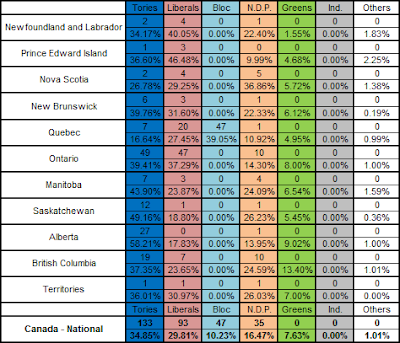 Now that we have a "below the fold" option (IE the "READ MORE!" button) I am able to add extra images of the ElectoMatic to the post. Click to see riding by riding projections in certain areas. 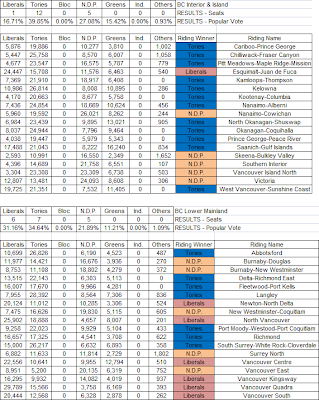 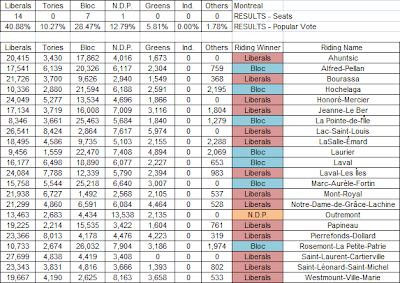 Posted by Unknown at 6:59 AM No comments:

The real winners tonight are the Liberals, Dalton McGunity, and the HST. The two anti-HST parties, the Tories and the NDP, only managed to take votes away from the Greens who have remained ambiguous on the issue. Clearly not only is the HST not the volitile issue that people make it out to be, but the Liberals even gained votes on their 2007 results, where a star cabinet minister was the candidate. The Tories meanwhile could not increase their vote significantly even with their own star running.