Instructions to project like me (and make maps too)

Quebec used as our example

STEP 1
Find the poll average for the current date and time. One way to do this is to go to a poll aggregator website, or, a website that has one attached, like http://www.threehundredeight.com/ Note down the numbers. Feel free to round a bit. This gives us the following numbers: 14C 23B 29L 32N You'll note the Greens appear to have a small base of support, but you will learn after doing many of these that the Greens will not be winning any additional ridings at these levels.

STEP 3
Select the province you are doing (in this case, Quebec) from the drop down menu. Also, begin by setting each square that shows 1.000 to 0.500. Also change the OTH and GRN numbers to 0.000

STEP 4
This is the "fun" part. Now you hit Project and see what the popular vote figures are. Then you hit back, and adjust your numbers. Example: The Liberals are at 14.6, but we want them closer to 30. Thus change their number from 0.500 back to 1.000 and hit project again. If you've done everything I've told you to, the Liberals should now be at 25.5%. The NDP is at 38.6% but we want them closer to 32%, thus go back and decrease their number.  Setting the NDP at .370 will give you exactly 31.7% popular vote. You will now notice the Tories are too high. Go back and lower them. 0.400 will get you where you want. Now however, both the Liberal and NDP numbers have gone up as a result. The NDP will need to be adjusted down once more. The Bloc is also too high. And once you do that, of course, you'll find the Tories have gone up. Eventually the Liberals will need an adjustment down too. This is where you must 'round' the already rounded numbers and use estimates.

STEP 5
Settle on numbers. The numbers I plan on using are 0.400 for the Tories, 0.850 for the NDP, 0.990 for the Liberals, 0.480 for the Bloc, and 0.000 for everything else. Now you select from the drop down menu to view all the ridings. I usually start with the party projected to win the fewest seats, in this case, the Tories. You'll note that some ridings appear in Red or Blue (the numbers) below the CPC column. These are ridings the Tories are projected to win using the numbers you've put in. Now go to your map (the completed map will be posted below if you don't have your own copy) and find the riding names for each of the won ridings and colour them in with the proper colour, in this case, Tory Blue. Do the same for the Bloc, Liberals, and NDP.

STEP 6
Look for 'errors'. Math projections do not account for local variations. Look for things in your projection that seem a bit fishy. Example: this projection shows the Liberals winning Outremont. The NDP's leader is running here, and while the Liberals may knock him off, it does seem a bit fishy that a party projected to win the province would be unable to elect it's leader in said province. This is when you need to use a human judgement call - or just use 308.com's math that shows star candidates can win about about 15% more than expected. Thus, Outremont should not be Liberal Red, but NDP Orange. Sainte-Marie is another case, but this time, it is a former leader in play. This projection tells us the Bloc should win. Last election the Bloc leader ran here, a man who was very popular in the riding, but the coming election will not see him run. Can the Bloc really hold on to Duceppe votes? Again, a judgement call is needed, and in my judgement, the answer is no. Thus, this riding becomes NDP Orange. Now look for ridings that appear out of place. Note the Liberals winning in Brome and Berthier. Brome is a historic Liberal/Red Tory riding. Thus it does make logical sense the Liberals could win here. Berthier however? Well remember the local NDP candidate had quite the controversy during the last election. If voters here want to reject the Bloc, and, if the Liberals put up a good candidate, they could run a dirty campaign and win. How about Saint Maurice, where the Bloc is projected to win? Remember the current MP here switched from NDP to Liberal, this riding could see vote splitting and thus, the Bloc could indeed win. 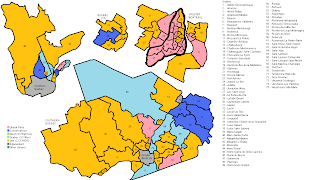 And after the riding adjustments, your final projection should be as follows: 38N 21L 9B 7C
Write this down, as you'll need to use it again when you are done projecting the other 9 provinces and 3 territories; but for Quebec, you are now done.


You'll likely note this is the map of the current ridings. These will be out-of-date by the next election. Have no fear, the website you used to make these projections is usually quick to update it's federal forecasters, and when the official riding vote transcriptions are done, they will update. I can also assure you that once final map boundaries are submitted to the House of Commons, that I will have maps available as well.

Posted by Unknown at 6:32 AM No comments: