Candidates, as of friday night, end of the first week

** = It has come to my attention that the leader is not listed on the candidates page, which contains 29 people.

I read these results in the following way:
This is indeed a 2-way race between the Tories and the NDP. The Liberals are established but seem destined to remain in opposition. The 4 candidate lead by the NDP over the Tories does not read as significant at this stage, however the next week will be critical.
Posted by Unknown at 9:26 PM No comments:

Again, this update results in no seat changes.

Here is another image from the ElectoMatic - this time the province of Manitoba. 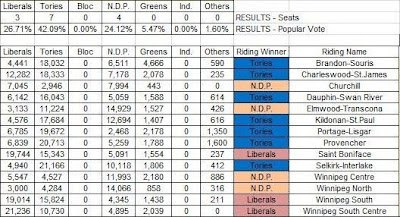 Posted by Unknown at 8:51 PM No comments: