What I want to happen

Whether intentional or unintentional, our biases influence our work. I'd therefore like to explain where I stand in relation to the parties in Quebec.

I've never been a fan of the PQ. I've always felt they are a little bit racist. They think of the Quebecois as an ethnicity, "nous", while I, do not. I think of the Quebecois as no different than Acadians, a type of French who live in Canada. To me, Acadian and Quebecois are "Ethnically" French, as in France French, and the same applies to all French-Canadians. The PQ seems to think differently with relations to Quebecois. They seem to think of the Quebecois much as the Kurds do of themselves. Trying to argue that the Kurds should have more rights an an independent Kurdistan is something that many would support; but the Kurds are internationally recognized as an independent ethnic group, the Quebecois are not. For this reason I despise the current PQ, Marois, and the PQ campaign of identity politics. I consider their plan to restrict the rights of those who do not speak French as akin to ethnic cleansing. Perhaps not the same violence-based ethnic cleansing that has been seen in the Balkans, but much closer to the expulsion of the Acadians by the British in the 1700s. I honestly think that the PQ would be very very happy if every last Anglophone left Quebec, and that is a viewpoint that I find disgusting.

The QS is an interesting case for me. While I support an alternative to the PQ, I do not oppose sovereignty  as an idea. In fact, I favour more provincial powers, and, support the right of Quebec to declare independence on 50%+1 of the vote in a referendum. The QS however is more than just another sovereigntist party, they are very radically left wing. I may be on the left of the spectrum on many issues, but I'm just not as left wing as the QS. For this reason, while I am quite happy to see them take seats away from the PQ in Montreal, I would be a little uncomfortable to see them become a large party.

The ON appeals to me. I've never seen anyone even bother to attempt to make the case for sovereignty until this video
http://www.youtube.com/watch?v=7fsIE63fP-4&feature=plcp
As mentioned above, I think that this argument is a strong one. Despite that, given the history of the PQ, this 25 second shaky video is still the single strongest argument ever made for Anglophones to vote OUI. I honestly think if the ON were to get into government and rule for 5 years, that Anglophones would actually be willing to vote OUI. The fear of PQ racism is what I think drives many Anglophones to go out in droves and vote against Separation. With the ON trying to prove that you can be a OUI voter and not a racist, they appeal to me.

The PLQ is tired and old, and Charest seems unwilling to think outside the box to change things. Don't get me wrong, I have great respect for Charest. In fact, the "Charest Liberal" is where I often sit politically. In the centre-right of economics but still Liberal. Charest has also been one of the luckiest politicians in the history of Canada. He avoided winning the 1993 PC leadership, and thus, avoided blame for the 1993 PC defeat. He brought the PC Party in 1997 back to life, and just before people started to seriously question a united right, was called away to Quebec. He lost the 1998 Quebec election, one that gave the PQ it's most unpopular term of office in over a decade, and when he finally won in 2003, it was with an ADQ that consisted of more than just one man, an alternative to the PQ. After a minority in 2007 that harmed the PQ more than the PLQ, Charest pulled a majority out of his hat in 2008. The magic has finally worn off. Corruption stains the government and Charest seems set to lose his seat and his job. The PLQ, frankly, does not deserve to be re-elected.

The CAQ is a merger of disaffected PQ and PLQ members with the old ADQ. I remember watching the 2007 election on my TV and getting to my feet, jumping in the air, clapping, and laughing, as the ADQ overtook the PLQ in terms of seats. It was not a reaction I expected from myself, but in hindsight, I was very happy to see someone, anyone, break the two party system that had existed since Levesque. Looking deep into the policies, I support the CAQ much more than I support the ADQ. If I was living in Quebec and someone gave me a ballot, telling me my riding was tied and my ballot was the deciding ballot, without question I'd vote CAQ.


So, how to counter all this bias? The first step, I think, is to be aware of it. I'm quite aware that I favour the CAQ over the PQ and it is part of what pains my thinking. Am I seeing a movement to the CAQ over the PQ because I want to, or, because the statistics back it up? That is a topic I will tackle in my next post.
Posted by Unknown at 9:24 PM 3 comments:

As we enter the final few days, this is where things stand. 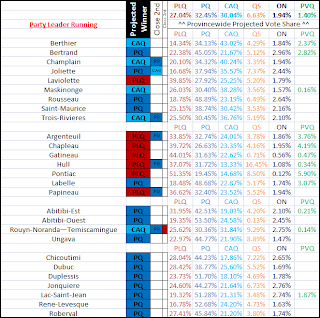 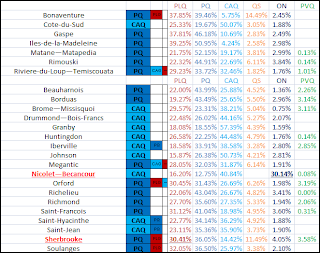 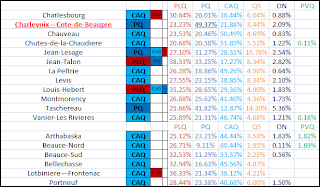 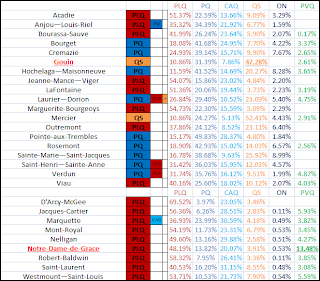 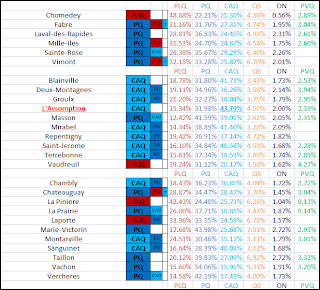 My thoughts on this bloc of undecided voters is thus.

They will not stay home.
If they do, my projection is going to be way off, because if they do, the PQ wins a majority. I think, however, that there are enough people genuinely scared of a PQ government that they will be motivated, at minimum, to get off their bum and cast a ballot. The "problem" here is that some undecided voters may be PQ-QS-ON, and thus, this elimination may not work.

They will not split their vote.
I can't see such a large and consistent bloc of undecided voters deciding to split their vote between the parties. Normally, when undecided numbers fluctuate, it is more likely to see a split, but my experience has told me that a more consistent number, like that we've seen in this election, is more likely to have their votes swing towards one party much more than to another.

So will they go PLQ or CAQ?
I don't know. That is the last question that remains to be answered. That, as well as, how much of a swing to the party will there be? Too small, and the PQ wins.
Posted by Unknown at 9:50 AM 4 comments:

I've been trying to figure out what all the undecided voters mean in this election. I have a few thoughts.

1 - They are PQ Voters scared to admit they are voting for the PQ because they see PQ policies as unpopular among some.
A: I do not think this is the case. PQ voters would not be afraid to standing up and admitting to be PQ voters.

2 - They are QS or ON voters who are not really sure they should actually back a smaller party.
A: Considering the modest jump the QS had after the debates and the ON after the Parizeau donation, I would think that they would have made up their minds by now.

3 - They are Liberals who are unhappy with Charest, but uncertain if they can trust Legault with their vote.
A: I think this is the case 100%. I do not think the PQ will get many of these undecided voters, I really think the PQ is about as high as it's going to go, and that unless the last few polls show momentum, the PQ will not do as well as the polls say they will.

This however raises the question: Where will the voters torn between the CAQ and PLQ go?

In the Federal election of 2011 we saw the same split in Quebec between the BQ and NDP. Voters at that time decided they could indeed trust Jack Layton and swung heavily to him.

In Alberta's recent provincial election, we saw the same split, this time, between the PC Party and Wildrose. Voters there decided they could not trust Wildrose, and swing heavily to the PC Party.

So where will voters swing? Will they head to the CAQ because they feel they can trust Legault? Will they swing back to the PLQ out of fear of Legault? And what if these voters fear a PQ majority, will they swing to the tried-and-tested PQ defeaters in the PLQ, or, to the party the polls say could defeat the PQ, the CAQ? Will these voters, alternatively, stay home, so upset that they have no positive choice, and thus allow the PQ to take an even larger share of the pie?

I don't know.
But I'm trying to figure it out. I welcome any and all feedback from all readers on this issue.
Posted by Unknown at 7:46 AM No comments:

All Requests Answered... by someone else

This website
http://fed2012.pollmaps.ca/index.asp
Provides all the transpositions you'll ever need! Thanks to https://twitter.com/punditsguide for this amazing find!
Posted by Unknown at 5:14 AM No comments: