I'm sure you've read most of this on news websites, but there is one thing I wish to point out. The amendment proposed by the Liberals will give the opposition a chance to bring down the government in March, June, and December.

I predict a mid-July election.
Posted by Unknown at 8:02 PM No comments:

Our current projection for the final result is as follows:

However the margin of error is gargantuan,

We may, or may not, have further projections as the election date nears.
Posted by Unknown at 8:19 PM No comments:

A notice to our readers, unfortunately we will not be covering the BC election in great detail. We will offer our projection prior to the vote, but we will not be keeping a constant "running tally"
Posted by Unknown at 7:10 PM No comments: 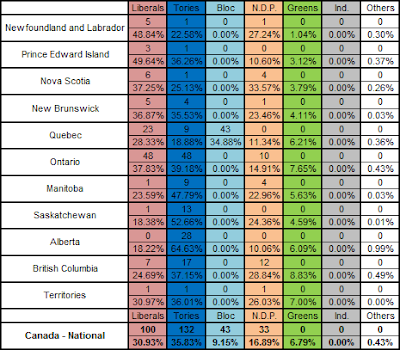 Posted by Unknown at 7:48 AM No comments:

The much vaunted new engine is finished a day early! All that’s left to do is individual riding tweaks for places where things happened in 2008 that are unique (IE strong independent candidates who are not running again, the Elizabeth May situation, etc) I’ve put a poll average of all the 2009 polls into the engine and it popped out some results. I do note that the poll average was without weighting (we prefer a minimum of 5 polls, we only had 4 to work with in most provinces) and that due to the differences in reporting (“West”, Vs BC and Alberta and the central Prairies) we had to try to break down certain polls and that could be problematic. The same is true for both central Prairie provinces and all 4 Atlantic provinces, part of the tweaking that will be done will fix these issues. Regardless, here is our projection:

Some questions. Why are the Liberals so strong? Partly this is due to some of the weighting issues I mentioned earlier, but more importantly, the Liberal vote is very efficient at these levels. The Tories and Liberals are tied in Ontario, yet the Liberals have a 7 seat edge here, while hundreds of thousands of Tory votes are wasted in rural Alberta and Saskatchewan. The NDP also appears to be strong, but much of this strength is in BC and Manitoba, which is more likely due to the small sample size and weighting difficulties, this will likely disappear as we tweak the system.
Posted by Unknown at 5:30 AM No comments:

When we have our first batch of riding by riding projections, they will go here http://s1.zetaboards.com/nixtuff/index/ to save space on the blog itself.
Posted by Unknown at 7:12 PM No comments:

The much talked about 'engine' is nearly complete. All that's left is to input data (and that's being done, with 7 provinces and 3 territories finished) from 2008. Following that we will further refine the data by adding 2006 and 2004 data. For complicated reasons, I already have year 2000 data and I've noted how much the voting patterns for the Conservatives in 2008 have mirrored the Canadian Alliance in 2000, with the exception of Atlantic Canada. Perhaps I'm reading too much in to this however.

We fully expect a new projection to be on this site within the next 48 hours, the first using our new engine. A seat by seat breakdown will also be available.
Posted by Unknown at 6:37 PM No comments:

Ask and ye shall receive

An article from the star:

The headline is "Harper edges ahead of Ignatieff in poll"

In general the poll does not change the 'ball game' in a major way from the projection below, though the Liberals are down in Quebec, and the NDP is up in BC. It appears as though more and more, much of the Tory success, pollwise, comes from Alberta. While it’s always been the case, the simple fact is that now more and more people live in Alberta, meaning a lead there will weight higher in national polls. The Tories are behind the Liberals in Quebec, and just about tied with them in Ontario. The biggest edge appears to come in Alberta and the other Prairie provinces. We may be entering a time where we will see the opposite of historical poll trends come true. In the past, the Liberals needed a 1%-2% lead nationally to win an election, even just barely, since so much of their vote was “wasted” in Quebec, where they would rack up huge wins. It may now be the Tories turn to experience this problem with huge wins out west. In the west, Conservative poll numbers are at, or are above 2008 numbers, but in Ontario they are steady, if not they’ve dropped. The problem is that many NDP voters have switched from the NDP to the Liberals according to the polls. Last election the NDP won 17 seats in Ontario, their highest ever in a federal election. All signs say that at least a dozen of these will revert to the Liberals.

The Bloc is another issue that I will deal with later. In short, their ‘weakness’ does not appear to be temporary. The Bloc does not appear set to ‘rebound’ to poll numbers that had them 15 points or more ahead of the nearest party for the past number of years. The Liberals do indeed appear to be back in Quebec.

We will keep an eye out for other polls as well.
Posted by Unknown at 5:56 AM No comments:

I’ve decided to do a projection now for a few reasons. One, if we do get a new poll later today it will likely be only one, perhaps two polls. To mix them with the 2 polls from over a week ago does not sit right with me. Secondly, in the run up to the budget, we still expect to see more polls come out, ‘just in case’ there is an election.

Therefore, I’ve combined the 4 polls we do have since Ignatieff has become leader, and I’ve made our first official projection of 2009. It is as follows:


No independents (Casey is not running and Arthur would likely lose if the Tories run someone – no reason to suggest they wont.) and no Greens (though Guelph would likely remain their strongest riding)
Posted by Unknown at 5:10 AM No comments:

Sadly, new polls have been lacking.

Rather than wait until further in the new year, we are going to put out our first 2009 "official" projection by sunday afternoon. If needed, we will use the 4 most recent polls.

We are still working on our vaunted 'new engine' and will have that up and running by the budget vote on the 27th. We may also have a surprise for you by then.
Posted by Unknown at 12:38 PM No comments:

Both have good results for Quebec and Nanos has a large sample from Ontario so lets do more "partial" numbers for you.

This should net, approximately, the following seat results:

If you add the 2008 results for the rest of canada (not recommended) you end up with the following numbers for the two main parties:


We note, however that the Liberals are far up beyond their 2008 levels, and in fact, are polling near 2006 levels in many places. If true this could swing a half dozen seats towards them. This would give an end result of:

Now of course a tie is unlikely, and I have warned many times that these are only approximate numbers. I in fact have chosen these particular numbers to show that the two parties are, at this time, neck and neck. Unfortunately, 2 polls are not large enough of a sample size to create a reliable projection from. Check back in a week, as we fully expect to see more polls between now and then, and we will put out our first post 2008 'full projection'
Posted by Unknown at 1:30 PM No comments:

According to a poll put out by Compass on December 23, the Liberals are at a shocking 42% in Quebec, with the Bloc at 28%, and the Tories at 16%. If true (and we honestly doubt this) this would make for the following results in that province: