Tories heading into election with advantage

As we head into a (potential) election, Harper's Tories increase their lead on Ignatieff's Liberals. 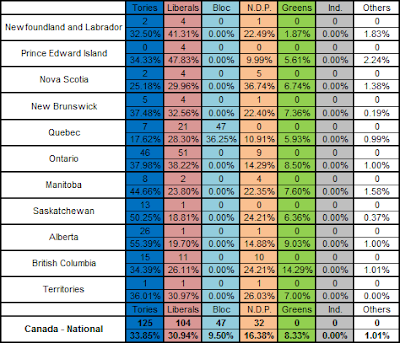 The NDP is just edged out of Outremont. This us due to Liberal Weakness more than NDP strength, as the Liberal average in the province has dropped from 35% to 30% in the past two weeks.

The Tories are also projected, for the first time since the 2008 election, to win seats in Newfoundland. In this case, Avalon and St.John's South.
Posted by Unknown at 3:04 PM No comments:

Please note I've adjusted the matrix to reflect new poll results showing the NDP over-performing in Montreal. If this is indeed true and holds, they will hold Outremont. I have them holding it in the current projection.

The Tories currently have an ever strengthening trendline, a few more polls in their favour, and we could see a dozen extra seats fall their way.
Posted by Unknown at 12:26 AM No comments: