Tories moving on up, slowly

There is also news that Gary Doer has been appointed the ambassador to the US (once he is officially retired from his Manitoba NDP Premiership) In our judgement this is a strategic move on the part of Harper. First, and most visibly, he appears to be 'reaching across the aisle', but more importantly, he is eliminating a possible future Federal NDP leader from contention. As we've seen with Bob Rae and Ujjal Dosanjh, provincial NDP leaders can go on to become Grits as well. Doer is very popular in Manitoba. A bit more about doer.

Gary Doer became Manitoba NDP leader in 1988, on the eve of / during an election in the province. Internal polling shows the NDP as low as 6% province-wide. Upon becoming leader, polls showed then NDP at 19%, and 23% on Doer's election. Doer was only able to gain a fraction of a point above this on Election Day, finishing with 12 seats, to the Liberals 20 and the Tories 25. Whats remarkable about this was the NDP was in government throughout the election. Doer specifically chose NOT to be sworn in as Premier. Doer would remain third party leader until 1990 when he became Leader of the Opposition.

Finally, on October 5th 1999, more than a decade before he was first offered the job, Gary Doer became Premier of Manitoba. He has held on to the job and his majority government ever since. Even the most recent polls show a Majority could easily be won should be decide to run again. What's the secret to his success? Pragmatism. Quite often the provincial NDP in Saskatchewan will claim that they invented the pragmatic centre position in the 90s. The reality is that Gary Doer wrote the play book. The Federal NDP tried to use a similar 'moderate' strategy, but fell flat. Doer made it work, and it is still working.

Thus we get to the present. Gary Doer is a strong politician. Would he become Federal NDP leader there is a good chance that the NDP could flourish, especially in the west. Due to the "brand" names of parties, the NDP could beat the Liberals in Alberta and walk away with a handful of seats. Should Doer switch to the Liberals and become Leader, he could all but kill the NDP on the federal level. All of this, however is dependent on two things. First, Doer's ability to win a leadership race, something which is hard to organize for when your living in another country, and second, the will. My read is the will is not there. Harper see's Doer as someone who could beat him in a fair fight and wants to get him out of the way. Doer, at least from where I'm sitting, is tired of bring Leader, and wants to move on.

Where all of this ends up remains to be seen. My prediction is that Gary Doer will never lead any federal party.
Posted by Unknown at 4:15 AM No comments:

With the new EKOS poll included.


The Liberals summer gains (opening up a lead in Ontario, and forcing the Tories down in Quebec) are starting to disappear. The only place the Liberals have really held on to their gains is in BC, where the Tories might be in some serious trouble.
Posted by Unknown at 1:00 AM No comments:

Tories are starting to come back to life in Quebec.
Posted by Unknown at 1:47 AM No comments:

Here at niXtuff we are starting to ramp back up in time for the fall season.

Three new polls are out. One from Ekos, one from Decima, and one from Ipsos Reid (IR), who has gone back to their bourgeoisie attitude of information elitism and has prohibited the masses from gaining access to the details of their polls. Even if we had the money here at miXtuff to buy a subscription (and we dont, we are a free site in all respects) we could not use the numbers we find in our projections since the content is protected (IR has shut down popular canadian election websites before through the threat of lawsuit due to them using their polls) With this Soviet-Style block on polling data, I will not be able to add IR data to the regional breakdowns except where they so graciously decided to make that information public. I will, however, use whatever national numbers I can find to 'reverse engineer' the current projection to a state that matches IR polling, and then apply that.

I will update when full details from Decima come out (which hopefully will be within 24 hours)
Posted by Unknown at 6:18 PM No comments: 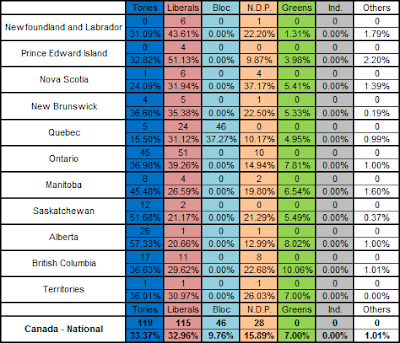 The Matrix has been updated, very strongly, with only the newest of polls. The result, however is that nothing much changes - polls remain stable. Next update may be in 2 weeks or so, again, I'm on an official vacation (even from work!)
Posted by Unknown at 11:46 PM No comments:

I'll be taking a break of a few weeks for half of August. If I get a mass of new polls I'll post an update, but in general things are stable. The Tories and Liberals are swinging back and forth at around 105-125 seats, while the NDP and Bloc seem to be stuck where they are.
Posted by Unknown at 9:14 PM No comments: