No commentary
Posted by Unknown at 1:43 AM No comments:

As you may have noticed, I did not update last thursday. Polls have slowed, and due to that, I plan to update every second thursday when there are very few polls.
Posted by Unknown at 12:19 AM No comments:

A new Angus Reid poll has been added to the Matrix, resulting in a larger Tory lead.


Some other notes from the poll:
Ontario is the most supportive of the "stimulus" package. As well, most people think said package will help the various provinces the most (Read: Ontarians are happy that Ontario is finally getting some cash)

Support for the parties, all parties, is soft right now. In the 2006 election we saw the polls not move and inch before the x-mas break. After it, the Tories suddenly had the lead, and again, the polls did not move, resulting in a CPC minority. The polls have been generally stagnant since Iggy has taken over, with the Liberals generally having a slight edge on the Tories, but the margins swinging back and forth between 130 and 110 seats for either party. My guess is that this will continue until the writ is dropped this fall, and will continue into the election, only truly settling in the final week or two of the campaign. It really is anyone's game at this point.
Posted by Unknown at 3:55 PM No comments:

Tories bounce back into first

The Tories and Liberals continue their struggle for first by fighting over a dozen or so seat in Ontario. Right now the Tories hold the edge. The Tories have also managed to bounce back in Quebec, and are on the way up in BC. 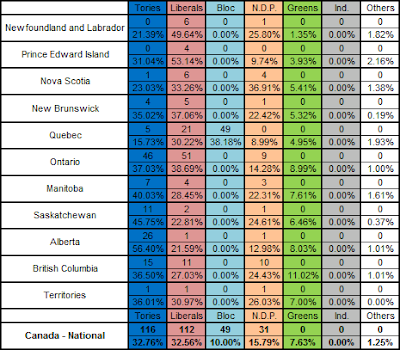 One Poll Special - Greens with 2 seats

This is a projection based on a single poll, the most recent Ekos poll. Single poll projections are very problematic, but are interesting regardless. Here are the results I get: 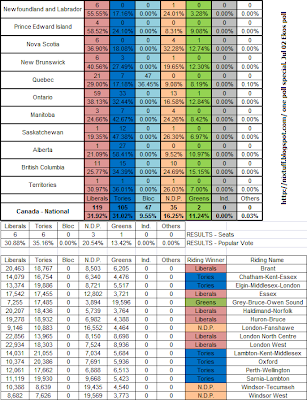 Liberals back on top

The new Ekos poll has been added to the matrix.

Not much going on this week that changes things radically from the projection posted a few days ago.

Happy Canada Day all. This country has somehow survived though 142 years.

Factoid: Did you know that there are also province days? Sure there is no "Ontario Day" or "Quebec Day" but each province celebrates a certain date.

Each province has a civic holiday on the first Monday or August. A civic Holiday is sort of a rich mans holiday, as those in salaried jobs tend to get it off while the hourly workers tend not to, nor do they tend to be compensated extra for their time worked on the holiday.

Beyond this; Manitoba celebrates a Louis Riel Day on the third monday in February. This a very "Manitoban" thing to celebrate. Newfoundland has an "Orangemen's Day" that is celebrated on the 12th of July, though without official status. Quebec celebrates a Fête nationale du Québec on the same day as St. John the Baptist Day.

So on what date were the various provinces founded?
Alberta and Saskatchewan were carved from the NWT on September 1, 1905. Manitoba was carved out of the NWT on July 15, 1870. The remainder of the provinces joined as former colonies.
New Brunswick was cut from Nova Scotia on August 16, 1784.
Ontario was cut from Quebec on December 26, 1791.
Unfortunately, the other provinces (Quebec, Nova Scotia, Newfoundland, Prince Edward Island, and British Columbia) were never cut from another colony, so to speak, and hence a "founding date" for any of them is difficult to ascertain.
Posted by Unknown at 7:12 AM No comments: