Why the sudden jump for the Liberals? Well most of these gains are in Ontario, despite only a 2 point swing in that province. We've reached the point in first-past-the-post systems where the vote for the leading party becomes very efficient. This is normally around 40% While the difference between 25% and 35% might mean a dozen seats, the difference between 35% and 45% could mean three dozen. Followed by another dozen between 45% and 55%; keeping in mind the votes received by the opposition matter for quite a bit as well.
Posted by Unknown at 8:46 AM No comments:

We are trying to jazz up niXtuff with graphics and images. Here is a beta version of a map, with bar graphs representing seat projections in each electoral region.

Details to follow.
Posted by Unknown at 9:27 AM No comments:

We currently see a clear trendline in only one province; Quebec. The Tories are heading down, as are the Greens (though the latter is mostly the result of the unrealistic 26% poll) while the Liberals and Bloc are heading up.

This will be factored into our newest projection, to be posted within 12 hours.
Posted by Unknown at 8:30 PM No comments:

Where the parties stand.

Our newest 5-poll average has the parties standing at the following numbers in each region.


Expect a full projection tomorrow.
Posted by Unknown at 8:31 AM No comments:

Our current projection is as follows.

The Liberals have the biggest gain in our projection as their poll numbers have finally solidified, and more and more voters express discontent with the current government.
Posted by Unknown at 2:10 PM No comments: 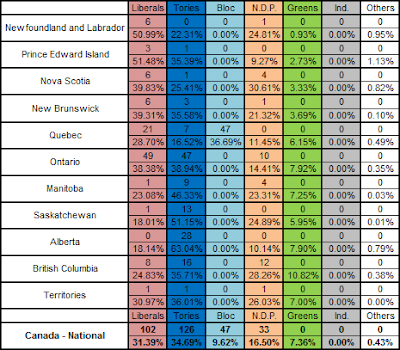 
The NDP is up due to gains in the West, while the Tories have also bounced back as the "bump" Ignatieff received after becoming leader finally dies off.

There is also a note about the newest strategic council poll. It seems their problems in Quebec are far from done, as they are reporting the Tories at only 10% in Quebec, tied with the Greens, which would be an all-time low for the Harper government. We do not believe this poll is accurate (as with the last strategic council poll in Quebec showing the Greens at 26%) but have included due to the fact that our system is designed to filter out these "bad polls"
Posted by Unknown at 4:49 AM No comments:

A history of projections at nixtuff.

I thought it might be time to stop and look back at some of our past numbers to see where the parties have gone over the time this blog has been in operation.

Lets start with December 7 2008.
This follows on the heels of an Angus Reid poll, shown here http://www.angus-reid.com/uppdf/2008.12.07_FederalScene.pdf that had the Liberals at their lowest number ever. Never before had they been at 22% nationally. They have, on many occasions, dropped to 23%, including during 2008, as well as during the late 80's, but never before had they hit 22%. As a result, this is also the highest number ever recorded for the new Conservative party in terms of our seat projection. Let's take a look at those numbers:

This would have seen the Liberals drop to an all-time low of 13 seats in Ontario, yet still manage to capture at least 1 seat in at least 6 other provinces.

Compare these numbers, especially the Liberal number, to our most recent projection. The Liberals are up 79 seats from this point.

On October 6 2008, we projected the NDP with 45 seats due to strong polling numbers. On September 12 2008, we had the NDP in third place, though with only 35 seats. Compare this to their devastating December 7th numbers. They, along with the Liberals, have recovered since then.

The Bloc meanwhile, have gone from their low of 33 seats on September 12th to a high of 52 on October 10th. There is no doubt that it is this gain that prevented Harper from getting his majority.

As the spring political season heats up, we plan to introduce more political commentary, as well as continue our quest to find historic polling numbers.
Posted by Unknown at 7:28 PM No comments:

Our newest national numbers, including one new poll, and both our trendline and baseline adjustments, show the following:

While the Liberals have been on the rise, they appear to have temporarily plateaued. Most of their gains so far have come from Ontario, Quebec, and the Atlantic. The West may be their new focus area.
Posted by Unknown at 6:18 PM No comments: